The font was originally authored by Darien Valentine @bathos and provided via a now-defunct site at fixedsysexcelsior.com. This derivative's source code repository and issue tracker can be found at github.com/kika/fixedsys.

The creator(s) of this content have released it to the public domain. For jurisdictions where this is not permitted, it is released under the terms of the Creative Commons Zero Dedication.

Where to get the result without compiling

The compiled TTF binary font is on the Releases page. There are two versions provided:

What is the ALT version in the releases about?

The fonts declare a set of ligatures that replace certain groups of adjacent characters by a combined glyph. The ALT variant has some of the ligature declarations swapped to facilitate code programming, where <= is almost always meant to be a less-or-equal operator, and also works for the general case too, based on the presumption that left fat arrows are seldomly used even in scientific texts.

I (Kirill Pertsev) was always jealous for folks using Fira Code, Hasklig or Monoid fonts, but my problem is that I have a hard time reading (not even mentioning writing) a computer program in anything but an 8x16 font. I probably spent too much time with older computers. So after fighting and losing an uphill battle with Glyph2, Fontlab and Fontforge I discovered TTX and was able to finally stop being jealous.

This current release has almost everything I use regularly. Feel free to request in the issues. PRs are of course more than welcome. I hope I'm not the only crazy guy on the internet using 8x16 font for consoles and text editing.

This font is a simulated 8x16 bitmap font from old Windows and DOS. It was truly monospaced and really bitmapped and initially contained only windows-1250, windows-1251, a subset of windows-1252, windows-1253 and windows-1254. Darien simulated the bitmap with TrueType outlines by building the font from 10x10 squares ("pixels") and then joining the squares together. As such, this font only works as intended in only one size and usually with antialiasing switched off. The size is 16px, or 12pt@96dpi.

He also added a lot of foreign characters and made the font Unicode.

The font is distributed in binary TTF format and I decompiled it with TTX, added a few symbols inspired by Fira Code and created necessary ligatures.

To design the symbols I used quad lined paper, pencil and rubber eraser. Like in good old days, you know. 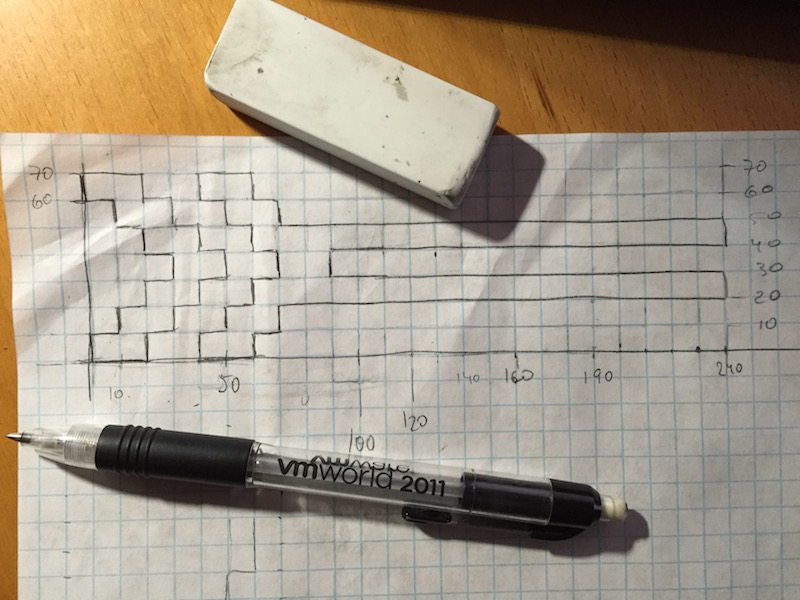 The supported programming ligatures are listed in the ligatures.txt file.

To create a TTF file from TTX XML, just run ttx -f FSEX.ttx (-f means overwrite) or use the OS X Makefile to also copy it to the user Fonts folder and update the font cache.

I only tested in MacVim so far (this is the only editor I use). Comments and bug reports welcome. MacVim should be quite recent for ligatures to work. Note: Versions of MacVim above 8.1-146 seem to have a regression where ligatures are not displayed correctly. Use brew pin to maintain your MacVim version below this until this is fixed. Tracking issue and workaround

Add the following to your .vimrc:

Should be defined in the user settings as so: